The devil (from Greek Diabolos, "slanderer," or "accuser") as the great power of evil has been much depicted in religious and secular literature and art as the spirit or power of evil. Though sometimes used for minor demonic spirits, the word devil generally refers to the prince of evil spirits and as such takes various forms in the religions of the world.

In traditional Trinidad Carnival, the Devil Dragon Mas may be divided into three main groups of characters: Imps, Beasts, and Rulers or Gownmen. 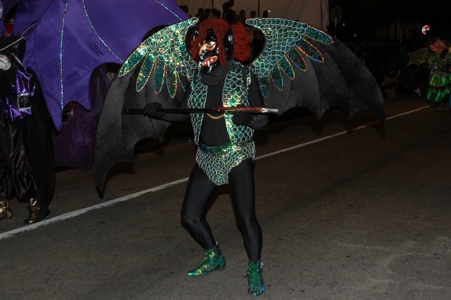 An Imp is a character who wears a pair of scaled pants or kandal over his skin tights. He wears a simple devil mask with horns over his face. He usually moves about in a sprightly manner, swaying his hips and making sudden leaps. This character often attempts to enrage the Beast. 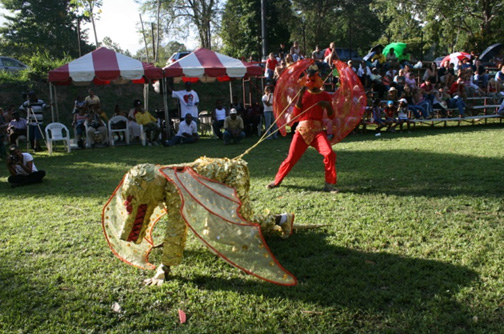 Imps fall into different categories. Each has a different function in the band. They are:

King Imp
The King Imp may wear a crown on his head to distinguish himself from the other imps. Sometimes he wears a pair of short pants under his scales or an overall.

Agitania
This Imp is like the master of ceremonies. He carries a key used to open the gates of hell.

Marker
This Imp has a flag in his hand to show the directions.

Axe Man
This Imp carries an axe in his hand.

Bell Man
This Imp carries a bell in his hand. 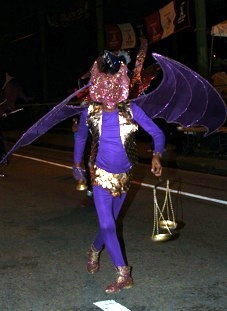 This Imp carries a scale in his hand. 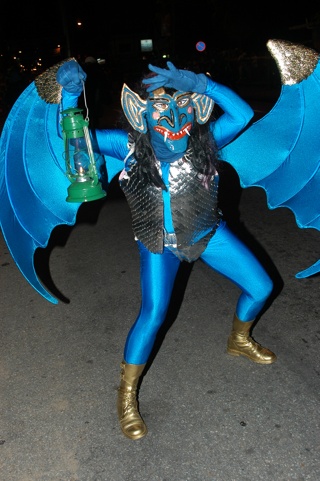 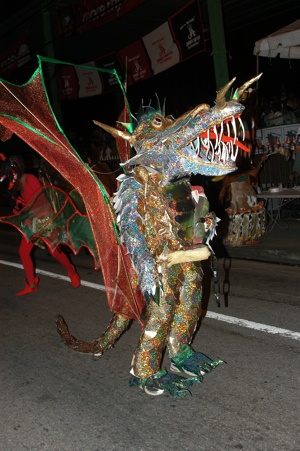 The King Beast wears a large dragon mask with a protruding tongue. His costume is covered from the head to the tail in scales of different sizes; these are sometime made of cardboard. There are long beastly claws which are attached to the ends of his fingers. He also wears a chain around his waist with a heavy padlock. 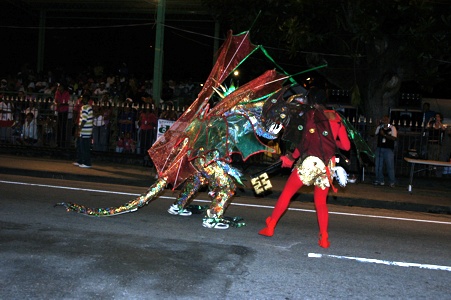 Key Man
This character is expected to dance in order to "open the water" to make it safe for the band to pass over. This process is necessary no matter the size of the waterway. Traditionally this masquerade is afraid of water.

Ladies in Waiting
These are glamorous lady devils. They wear special gowns, gloves, a pair of flat shoes and carries fans. They are always dancing. Normally five or six of these evil female characters would be waiting for one man.

Queen Patroness
This character is dressed differently from the Ladies in a waiting. She sometimes has a fork in her hand. 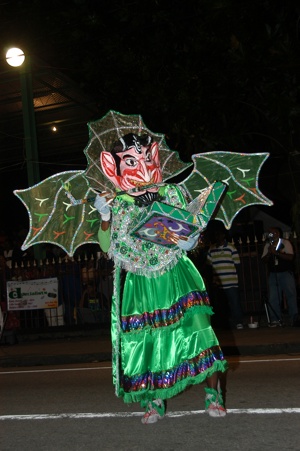 Lucifer
In classical mythology, the morning star (i.e., the planet Venus at dawn); personified as a male figure bearing a torch, Lucifer had almost no legend, but in poetry he was often herald of the dawn. In Christian times, Lucifer came to be regarded as the name of Satan. This traditional character wears a crown on his head and a large flowing cape. Normally a tall, elegant man plays this character. Lucifer is the king of the band. 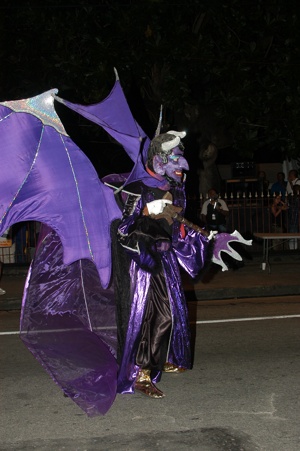 Satan
This character carries a fork in his hand. Like the Imps, he also tempts the Beast often. He is the second king. 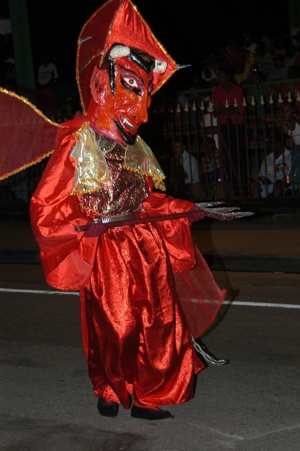 Bookman/Beelzebub
Prince of Dark
He wears a gown or a long robe. He always has a pen in one hand and a large book in the other in which he takes down notes. He wears a big grotesque mask with horns over his face. 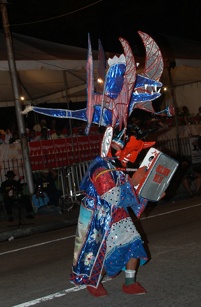 Prince of Darkness
This character wears a white outfit and over his face he wears a dragon mask. His movements are normally assertive.

Gentleman Jim
The correct name for this character is the Gentleman Devil. He is one of the best dancers in the devil dragon band. He wears a top hat and a long scissors-tail coat. In his hand, he has a walking stick. In short he dresses like the perfect gentleman.Satan

This character carries a fork in his hand. Like the Imps, he also tempts the Beast often. He is the second king.