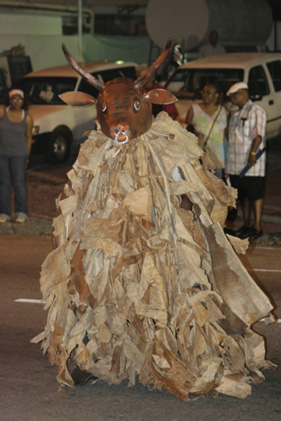 The Cow Band, which dates back to the days of the Canboulay, consisted of a small group of men dressed in costumes of sacking made from rice bags. These costumes were completely covered with dried plantain leaves. Each masquerader wore a homemade papier-mâché mask representing the head of a cow with a pair of horns. Members of the band would frolic and move through the crowds behaving like real cows. This masquerade became dormant for a few years, and was later revived by the employees of the Abattoir, and became part of the J'Ouvert celebrations.

Recently, usually on Carnival Tuesdays, the Cow Band comes out in brightly coloured costumes, with picadors and a matador who would challenge the cows. The cow character's costume consisted of tight-fitting breeches of yellow velvet or satin, with gold braid and spangles along the sides and around the bottom at the knees, a tight-fitting maroon satin long-sleeved blouse completely covered with a soutache decoration of gold braid, gloves, cream stockings and alpagatas. A well-secured cap-like contraption on the head supported a pair of highly polished cow horns. A short section of the hairy part of the cow's tail was attached to the seat of the breeches. An imported wire gauze mask replaced the cow mask of the previous day.