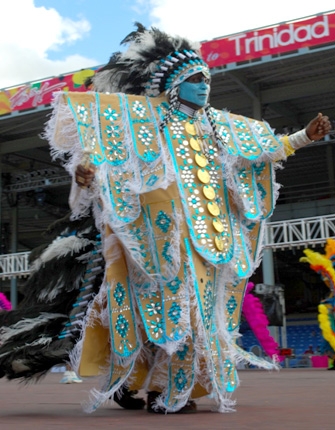 Fancy Indian – An imaginative and elaborate form, the Fancy Indian is the most popular variety of Indian Mas. This form of Indian Mas is non-authentic; one of its main features being large decorated headpieces.

Indians are one of the most colourful and interesting of the traditional mas characters; containing elaborate feathered headpieces sometimes built over bamboo or wire frames. The headpiece is supported by a structure that covers the masquerader's entire body. Indian Mas may incorporate any number of effects including papier-mâché masks, canoes, ostrich plumes, mirrors, beads, feather work, totem poles, and ribbons.