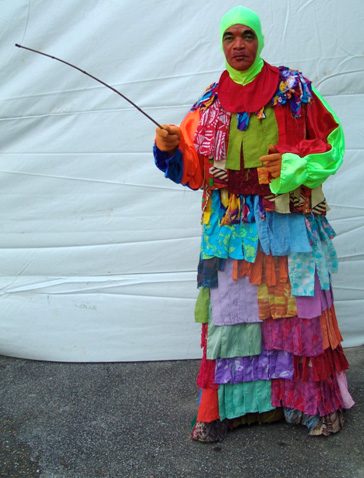 The Pierrot Grenade is the satirical descendant of the Pierrot – a finely dressed masquerader and deeply learned scholar. Pierrot Grenade falls under the category of Old Time Carnival and is the supreme jester in Trinidad Carnival. His name shows his strong connection to Grenada.

His costume is made by attaching multicoloured pieces of cloth to his gown-like outfit. In the old days, he wore a wire mesh mask over his face, and old hat with shrubbery attached, or simply tied his head with a handkerchief. Nowadays, however, the face is painted instead of the mask and a hood worn over the head. The Pierrot Grenade delights in displaying his knowledge and ability to spell any word. He prances and twirls about carrying a whip made of guava or hibiscus.