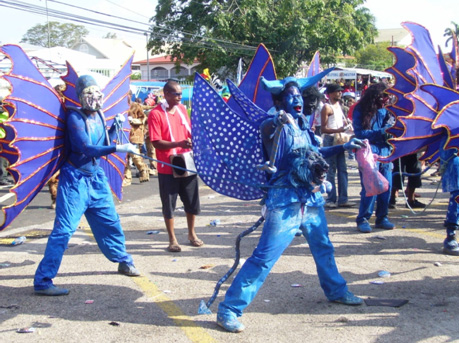 The Jab Molassi or Molasses Devil is one of the oldest forms of Devil Mas. He wears wings, horns, has a wire tail and carries a pitch fork and usually strikes fear in the hearts of both young and old.

He was usually covered in a sticky black substance, which was in the old days, molasses. Its origins date back to days of the sugar estates, when freed slaves, who formerly toiled on the sugar estates, daubed themselves with the familiar and readily available molasses (a direct by-product of sugar cane) as a means of disguising themselves and playing a cheap mas. Today, the Jab Molassie has evolved to include blue devils, red, green, white, yellow and even Jabs covered in mud, and chocolate syrup.

Some of the Jab Molassies have a rope or chain tied around their waists, which another Jab Molassie holds in an effort to restrain them as they jump around wildly. The Jab Molassie is accompanied by the beating of biscuit or pitch oil pans. They also carry a whistle used to dramatise their movements.  They will throw themselves to the ground and run around trying to intimidate and frighten people in the hopes of getting paid a dollar or two.

To avoid contact with him, many bystanders are willing to “Pay the Devil”.