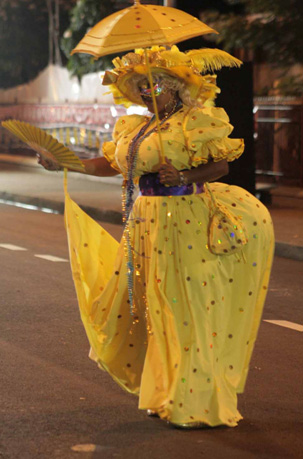 The Dame Lorraine poked fun not only at the elaborate festivities of the rich planters but also their physical infirmities. The name of each character was in French Creole. These names were very descriptive and pinpointed certain bodily defects. At one time, the big bottom and the big breasts were worn by separate characters. Today, both are combined into one outfit, worn by one character. In the past, mostly men portrayed Dame Lorraines. As of late, mostly women portray the character.