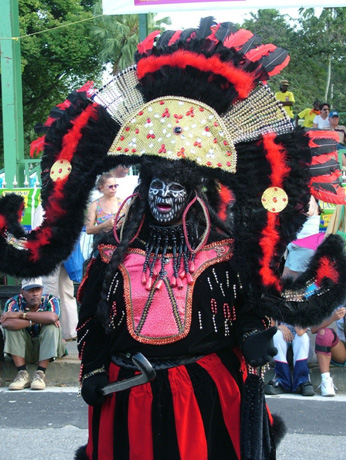 Black Indians – Combines certain elements of the Red Indian with some African derived elements. They dress predominantly in black with other colours. Their faces are also painted black. They have their own distinctive speech.

Indians are one of the most colourful and interesting of the traditional mas characters; containing elaborate feathered headpieces sometimes built over bamboo or wire frames. The headpiece is supported by a structure that covers the masquerader's entire body. Indian Mas may incorporate any number of effects including papier-mâché masks, canoes, ostrich plumes, mirrors, beads, feather work, totem poles, and ribbons.