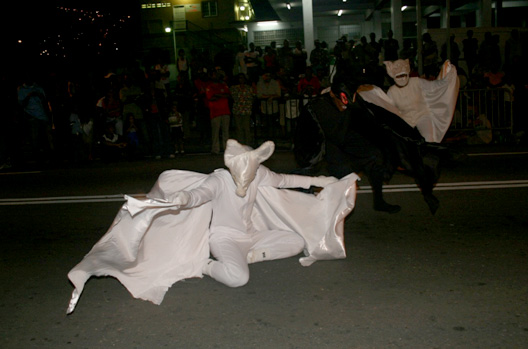 The typical bat costume is normally black or brown, (although white bats are not uncommon) made of swans down with papier-mâché face, teeth, nose and eyes, and fitted tightly over the masquerader's body. While claws are sometimes attached to the shoes, the headpiece always covers the masquerade's head completely.

The masquerader sees through an opening in the headpiece where the mouth is located. The wings, which may be as large as 12 to 15 feet, are made from wire and cane, and may be covered with nylon or cotton fabric or the same material as the skin-fitted costume.

The player of this character crawls and dances on his toes. He also folds and unfolds his wings and generally tries to imitate the exact movements of the bat. These choreographed movements are called the “Bat Dance” because they mimic a bat’s movements.