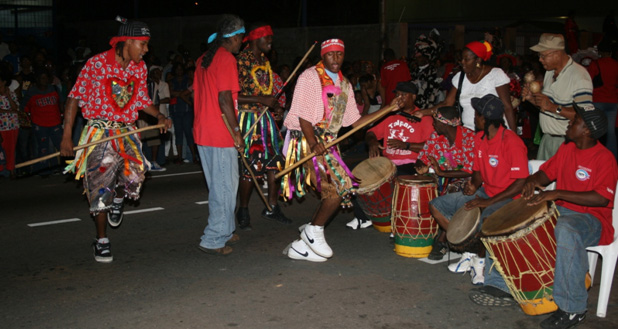 The Kalenda (Calinda), a stick dance, owed its origins to pre-colonial times, as early as the late 1700's.  The term Kalenda emerged as a general term for the stick-fight, the dance, the songs and other performances that accompany it. Contrary to some mythology, Kalenda is not a hybrid of African stick fighting and European fencing, but is more closely related to the African-descended martial arts.

Kalenda, a lively and skillful dance, is an elegantly violent cultural practice that requires dancers to engage in mock combat with their sticks (bois) in the middle of circle called a gayelle to the accompaniment of drumming and singing, often in patois. They were led by a lead singer (chantuelle or chanteuse) whose duty it was to either encourage or deride the dancers. The chantuelle, in turn was backed up by a chorus of women.

A highly ritualised display, Kalenda is an integral attraction of modern Carnival celebrations, with the finals being held in early hours of Carnival Friday (the Friday before the Parade of the Bands).